The 2017 Youth Risk Behavior Survey reported that 44% of North Carolina youth have used a vaping product, such as electronic cigarettes — e-cigarettes — like JUUL.

At least 22% of them will use a vaping product today, according to the survey. 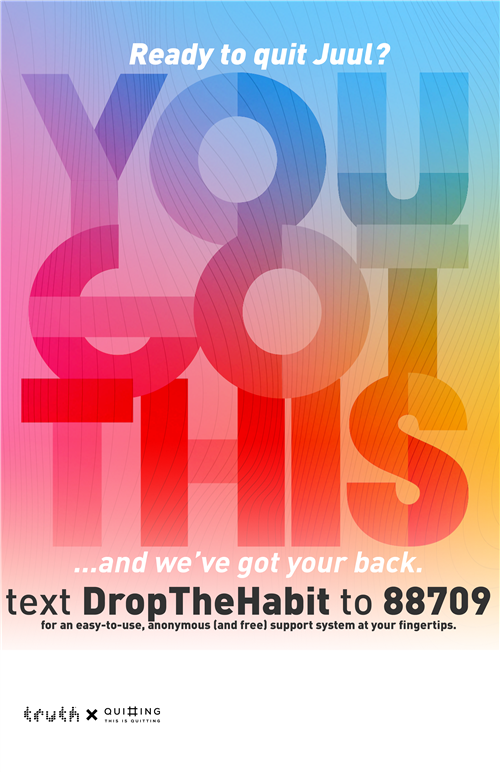 Those products may contain nicotine and many other harmful substances. Nicotine can alter brain development in young people and — because it’s highly addictive — is poised to hook this generation of schoolkids the way tobacco products bound their parents and grandparents, said Anna Stormzand, who focuses on health promotion and policy for the local public health department

TIQ incorporates messages from young people who have either attempted to or have successfully quit e-cigarettes. The messages, which include evidence-based tips, show both the good and bad of quitting e-cigarettes.

“This is Quitting allows a teen the opportunity to receive information about vaping and the option to quit on their own terms. This is done confidentially so teens can maintain their privacy,” said Rob Schooley, an instructional program facilitator for student health, physical education and wellness for the local school system.

Nationwide, at least 100,000 young people have enrolled in TIQ since its January 2019 launch.

Nicotine impacts key brain receptors in young people, making them more susceptible to addiction, according to research. Some e-cigarettes have high concentrations of nicotine, which increases the difficulty of quitting. That’s where TIQ comes in, Schooley said.

Those interested in enrolling in TIQ may text DropTheHabit to 88709. Users including a desired quit date in the text will receive one support text per day for a week both prior to and at least 30 days afterward. Those not ready to establish a quit date will receive at least two weeks of messages aimed at moving toward that end. TIQ participants are able to receive on-demand support for cravings, stress and setbacks, in addition to their scheduled interactive messages.

Flyers, posters and palm cards with the DropTheHabit code and 88709 contact number have been distributed to schools and other community partners across Chatham County. Schooley has more information and materials for those who reach out to him at rschooley@chatham.k12.nc.us or 919-542-6400.