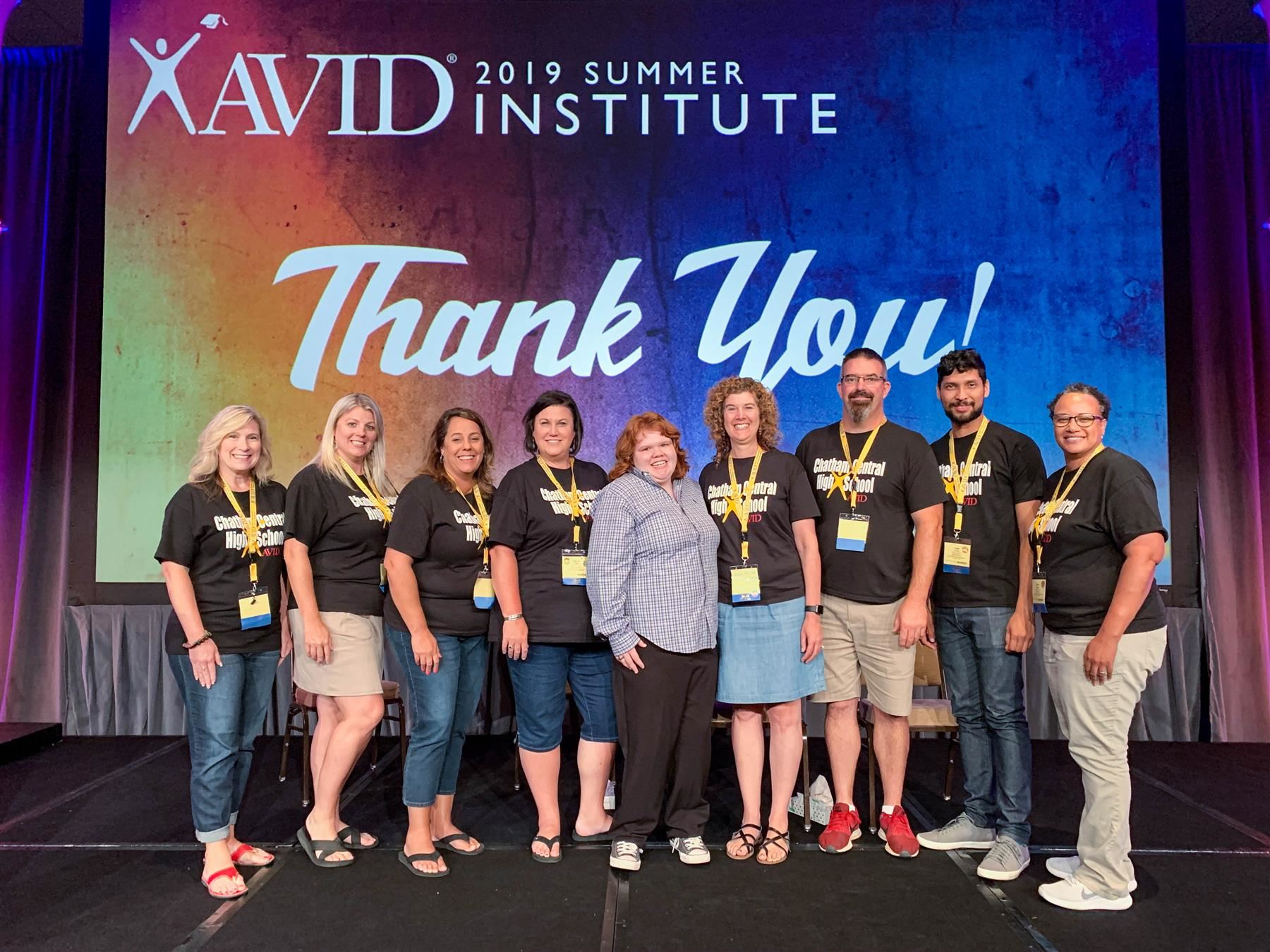 BEAR CREEK — The tale Randa Branson told in Tampa touted her tenacity to the point of moving Dr. Karla Eanes to tears.

And Eanes actually had heard the speech before.

“Simply powerful,” said Eanes, who was Branson’s principal at Chatham Central High School, where that same speech in March stirred the souls of a national team from Advancement Via Individual Determination (AVID).

Branson, who graduated from Chatham Central in June, recently shared her story in Florida inside the Tampa Convention Center during an AVID 2019 Summer Institute. That’s one of the organization’s annual professional learning events where educators are privy to the latest developments in AVID.

AVID is a system of learning that, in part,

teaches students how to both take and organize notes for optimal learning. Chatham Central’s educators are so masterfully implementing those concepts that the national AVID team used its time in Bear Creek to distinguish the campus as a national demonstration school. The status positioned Chatham Central to host educators endeavoring to witness AVID operating at a very high level. Some in Tampa for the professional development expressed interest in visiting Chatham Central, where Laurie Paige coordinates the school’s AVID program.

The Tampa trip gave Chatham Central’s educators an opportunity to deepen their knowledge of AVID by getting beyond foundational principles such as helping students take better notes and getting them to grasp time management by logging their academic workload and extra-curricular activities in planners.

“We were really delving into the content areas,” Paige explained.

In other words, Chatham Central Spanish instructor José Cerna was himself a notetaker there in Tampa absorbing AVID strategies specific to his subject area. He and other teachers from Chatham Central morphed into students in order to take what they were learning at the institute and incorporate it into their classrooms, instill it in the next Randa Bransons.

“People were asking for her autograph,” said Chatham Central AVID educator Eric Patin, who was among several thousand people in the convention center when Branson moved the crowd.

After Branson’s speech, folks stopped her in the convention center and at her hotel and in the airport, because they just couldn’t get over the young lady from the small, rural school in Bear Creek.

“They were stopping her everywhere we went,” Paige said. “She did an amazing job.”

“It was life changing,” Branson said about speaking in front of so many people. “Without AVID, I would’ve never done it. I would have been too scared.”

Part of Branson’s speech dealt with the medical challenges she’s overcome, and she's scaled classroom obstacles, along the way accumulating confidence by leaning on teachers like Karen Heilman, whom she refers to as her school mom. Those educators, through AVID, have her

headed to the University of North Carolina at Greensboro this fall.

“I’ve got this inner drive, and it ain’t going nowhere,” Branson said. “Once you have AVID, it doesn’t leave you. Once you’re in, you’re in.”

The educators at Chatham Central helped her understand that she had permission to believe that college was a viable option for her. They gave her a growth mindset, instilled the audacity that she could emerge from a national search to be one of two student speakers during the AVID conference in Tampa. They developed in Branson the ability to mine the moxie to get on a stage and tell a story that leaves folks gushing.

They didn’t give Branson her voice.

But they did show her where it was — and amplified it.

They did it with AVID.

“Watching her on stage in front of thousands of educators,” Eanes began, “and the response from the audience as they embraced her story, that was the piece that made it different.”

Which explains the tears.