District seeking those keen on kudos to boost recognition program

PITTSBORO — Musician Charlie Daniels is legendary for performing “The Devil Went Down to Georgia.” “Marketplace” reporter Reema Khrais is heard coast to coast on public radio. Both are Chatham County Schools (CCS) alumni and check the boxes for potential candidacies in the district’s Distinguished Alumni Program.

Yet so did Justin Palmer, whose reach is not as broad as Daniels’ and Khrais’. 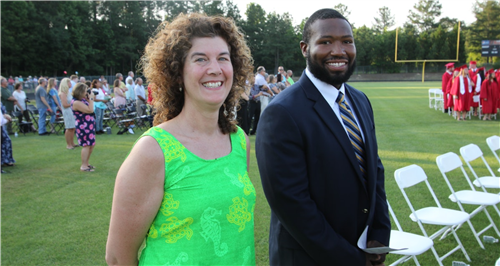 Yet it’s what he does with his very local platform that enabled him to be singled out in the Distinguished Alumni Program.

CCS is accepting nominations for the 2018-19 Distinguished Alumni Program. An overview of it is included with an online nomination form at bit.ly/CCSDA2019. Paper copies of the nomination form are available at the district’s high schools and at its headquarters located at 369 West Street. The deadline for nominations is March 15.

Now in its third year, the Distinguished Alumni Program recognizes graduates from both current and historic schools in the district. For example, graduates of the former Horton High School would be eligible for recognition with Northwood High School graduates because of the proximity of the campuses. An alumnus representing Chatham Center for Innovation, Chatham Central, Jordan-Matthews and Northwood high schools will be invited to the respective school’s commencement ceremony in June and receive a framed diploma and tassel. The alumnus’ name will be engraved on a plate for display on a perpetual plaque at his or her respective alma mater.

The 2017-18 Distinguished Alumni Program winners included entrepreneur and philanthropist John Ruffin Jr. and retired businessman Ed Spence. Both were lauded for making a difference in their professions and communities, which are tenets of the designation, along with significantly contributing to CCS.

Palmer is much younger than Spence and Ruffin, so his designation highlighted the Distinguished Alumni Program as an honor not reserved for retirees or those wrapping up their careers. A 2008 Chatham Central graduate, Palmer, a Goldston resident, at the time was a YMCA youth director who away from the job continued pouring into children through coaching sports when he wasn’t hunting deer in order to donate the meat to anyone who needed it.

"I was speechless, I will just be honest with you," Palmer said about his place in the Distinguished Alumni Program. "For that to happen, and for folks to feel like what I was doing was admirable, it meant a lot, because you don't always think about, on a daily basis, the impact that you're having."

During Chatham Central's commencement ceremony at its football stadium this past June, Palmer marched onto the field with dignitaries including members of the Chatham County Board of Education, and there was CCS Superintendent Dr. Derrick D. Jordan and Mitchell Stensland, who retired as Chatham Central's principal in October. Stensland was Palmer's principal. And, once upon a time, Palmer suited up for the Bears on that same football field. Many memories washed over him during the stroll down memory lane toward his seat at the graduation, and all of them were underscoring that he'd actually impacted people's lives — it’s why he'd been distinguished, Palmer explained.

"Nominate people because you never know how much that means to that person and, at the same time, for that person to get recognized," Palmer said. "If you know of somebody, please nominate them; allow them to have that opportunity to be recognized if they are chosen."