PITTSBORO — With apologies to the great Dr. Seuss …

Oh, the places you’ll go as the first lady of North Carolina, Kristin Cooper, was at Pittsboro Elementary School Friday morning, March 2, 2018 for Read Across America, the annual reading push by the National Education Association that ties in the March 2 birthday of the late children's author Dr. Seuss.

In the library at Pittsboro Elementary, Cooper ditched the rocking chair and joined first-graders on the floor. 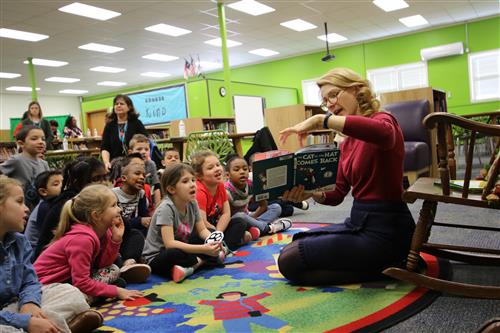 She grabbed a copy of Dr. Seuss’ “Hop on Pop.” The sentiment from the kids was that book’s for babies. So Cooper settled in to wade through a weightier tome — “The Cat in the Hat Comes Back.”

Which prompted one of the first-graders to ask Cooper about her cats. The first lady said her felines are named Alexei and Adelaide. Those cats actually have a Facebook page!

One student asked the first lady where she lives.

“I live in Raleigh,” Cooper said.

It’s not a bad house, the governor’s mansion.

“My mom went to Raleigh the other day,” a student said.

“We have a museum that has dinosaur bones in it,” Cooper said.

Pittsboro Elementary principal Chris Poston showed off his school, which exceeded growth expectations in reading and math during the 2016-17 school year.

Poston is the Chatham County Schools Principal of the Year. Pittsboro Elementary also boasts the district’s Instructional Assistant of the Year, Susan Hoffman, who, along with several Pittsboro Elementary educators, had a private meeting with Cooper. It was an opportunity for them to share ideas and concerns with the first lady, who, obviously, has the ear of the governor. Cooper said her husband already is working on many of the issues raised by the educators.

“We would love to get more help for public schools,” Cooper said. “They’re the engine that drives our economy and always have been, so we need to be supporting them and the teachers and the people that provide the service for our children.”

Allison Farrish, Rayetta Fox and Raquel Daniels were at the private meeting representing the Chatham County Association of Educators.

The first lady dropped in on the classrooms of Pittsboro Elementary teachers Jonathan Lategan and Hannah Christenberry. Cooper saw students tapping on laptop computers. The first lady said she was not surprised by all of the technology at the fingertips of Pittsboro Elementary students. It's just that abundant technology doesn't abound in every school system around the state, she said.

“What surprises us is when we go to places that don’t have it,” Cooper said.