Of course, mere worksheets can do that, he told Chatham County Schools educators during the district’s Digital Innovation Summer Conference (DISC) July 27 at Margaret B. Pollard Middle School.

Effective educators do more than engage; they empower, and these days that has to include plenty of technology, McCoy said. That’s the way it is at his school in Salisbury. It’s why he was distinguished as one of three 2014 National Association of Secondary School Principals Digital Principals of the Year. The award recognized his ability to help teachers integrate technology — digital learning — into their classrooms, something that can start with educators doing something as simple as embracing Twitter, McCoy said.

“This is how I connect with people smarter than me — smarter and braver than me,” McCoy said.

Social media is where McCoy accesses blogs and other resources about the work of education. That’s where he got the idea to rip a row of lockers from a wall in his school and establish workspaces called genius bars. Think of a casual setup at Starbucks with high tables and accompanying stools, and voila!

“We’ve got kids clamoring to go out there and do work,” McCoy said. 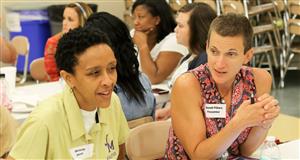 McCoy is transforming his schoolhouse into a 21st-century learning space for students, some of whom won’t report to offices when they enter the workforce. Cellphones have become the new cubicles, he explained.

“Think about what their workspace is going to look like when they’re adults,” McCoy said.

During McCoy’s keynote speech, he presented a slide that showed a woman interacting with a device that allowed her skin to function as a display screen for interfacing. She literally tapped and swiped her wrist to manipulate the visuals. McCoy contrasted that with a sheet of paper filled with multiplication problems. Worksheets won't readily develop students into creators of sophisticated technology that turns a wrist into a computer screen, he said.

The conference’s name was tweaked for a DISC-O theme that encouraged 1970s attire — platform shoes, bell-bottom pants, sequins. The turnout was larger than anticipated with roughly 125 participants giving up a portion of the summer to build skills that will help them help students when school starts Aug. 28, DeCourcy said.

“They’re teaching kids who live in the 21st century, and what that means is they’re living in a digital ecosystem 24/7. So they need to be critical consumers and critical creators,” DeCourcy said. 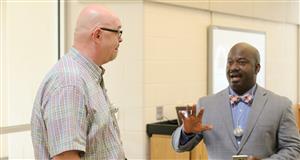